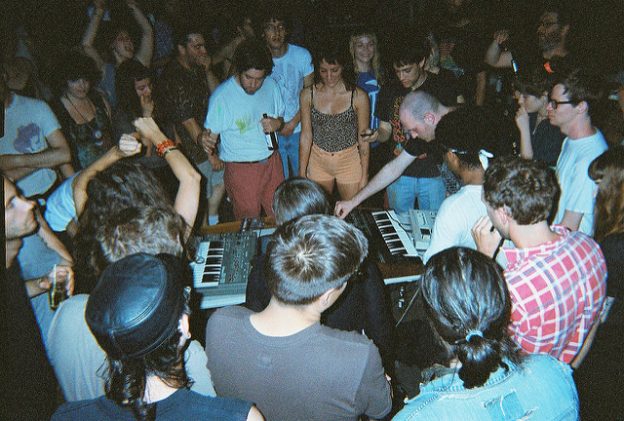 But down an alley nestled between the candy-pink cement of Tonya’s Cookies and the mood lighting that oozes from Northside District, it can be easy to miss a small music club.

The venue isn’t very big, and it’s tough to imagine a sell-out show of more than 300. The low ceilings keep the stage at a height that barely distinguishes artist from audience, and although red paint lines the walls, the club’s ambiance is far from bright.

Scarce lighting casts shadows on dingy furniture and tangles of cord, making anyone unfamiliar with the place second-guess a whim to wander in from the street. But it’s here that the misfits of Chapel Hill’s music scene find their sanctuary.

Because of Chapel Hill’s quintessential college-town status, the music scene is multi-layered, ever-shifting and sometimes perceived as lacking an edge. But for the past 10 years, a small-but-steady vanguard of artists and music lovers has cultivated a space for experimental and alternative music. And that crowd has come to call this music venue, Nightlight, their home. These champions of the weird and different have ushered in a host of new amorphous music genres, most of which fit under the label “noise music.”

Noise is a term that has been used nationally to describe a type of experimental music developed from the punk wave and dada art movement that pushes the boundaries of sounds and techniques that are traditionally considered “music.”

For many critics, Chapel Hill’s music scene peaked in the ’90s, when the town’s indie and punk bands drew in major record labels in search of the next Nirvana. In 1989, Mac McCaughan and Laura Ballance — members of Chapel Hill’s indie rock band Superchunk — fled from major record label pursuit — and, in true “do-it-yourself” punk fashion, formed their own independent record label.

Merge Records went on to sign artists such as Arcade Fire, Neutral Milk Hotel and She & Him. But, when the label moved to Durham in 2001, Chapel Hill was left in a sort of punk-rock vacuum.

“In a lot of ways, music in Chapel Hill is totally dead. In the ’90s, Chapel Hill was like a huge indie-rock Mecca.” said Sam Higgins, a Chapel Hill musician who performs under the name SMLH. “The scenes were Seattle, New York and Chapel Hill, oddly enough. I feel like, nowadays, the legacy of those bands is supporting this notion that music is still thriving in Chapel Hill when it’s not at all.”

Last November, SMLH released an 11-track digital album and cassette tape called “Occoneechee Haunts + Staring Thru The Wall,” which features tracks riddled with an ethereal concoction of dissonance and melody, delving listeners into a sleepy yet strangely outraged state.

“I feel like there are a lot of parallel scenes that don’t really overlap so much. Like, for instance, bluegrass is a real thing, and I know nothing about that,” he said. “The stuff I’ve been involved with is sort of more marginal. Kind of weird experimental type stuff.”

Martin performs under the name Secret Boyfriend. His blend of genres produces a dark, lonely sound whose minor chords and bursts of unorganized cacophony can be hard on some ears. His most prominent recording is “This is Where You’ve Always Lived,” a digital and vinyl LP released in 2013 under the London-based label Blackest Ever Black.

But Martin doesn’t seem too concerned with the success of his recordings. He prefers to promote the projects of his fellow musicians.

Martin also books a lot of the shows at Nightlight. Shortly after Martin made the move to Chapel Hill, he started volunteering at Rosemary Street’s clandestine music club because he wanted to find out more about the scene in his new town.

By the end of the year, he was running the whole venue with a friend. Now, since club ownership has changed hands to Ethan Clauset and Charlie Hearon, Martin books shows at several venues, including, up until last year, his own house on Hannah Street in Carrboro.

“I lived there for about 8 years and we had a shit ton of shows. Like, so many. I couldn’t believe we got away with it for that long,” he said.

But there’s not much difference in booking for a house show or a bigger venue, he said. Martin is plugged into a vast network of local musicians, and whenever one’s in town, they come to him for a place to play.

This grassroots approach to performance is what sets the underground scene apart from the mainstream. For musicians to survive in the commercial industry, they need to have an agent, a manager, a tech crew, publicity and ceaseless touring and producing. Stewart Kingdon, social media manager for WXYC, a student-run radio station at UNC, thinks the underground scene is underground for a reason.

“I think part of that is just the way people want it,” he said. “Like, I know a lot of my friends don’t want to play in a lot of big venues or anything, or it’s just a hassle or it’s hard to coordinate a show or you need to open for someone, and it’s just not as easy to coordinate.”

Martin, like other artists in his genre, thrives in scenes that stray from the limelight.

“I think I’ve always just had sort of a weird mistrust of mainstream music,” he said. “It’s really exciting hearing something so good, and it’s made by people who aren’t trying to promote themselves — they just like to play shows. It’s just like they’re sort of ignored because they’re not putting themselves into this hype machine,” he said.

Although Martin tries to avoid the “hype machine,” he still wants underground music to be accessible for those who seek it. That’s why he finds all sorts of artists for Nightlight, people who play everything from “techno, harsh noise, sort of weird scrappy improv,” to “people doing weird, solo pop projects.”

Clark Blomquist is a regular at Nightlight — not only to listen to shows and find new artists, but also as a performer. Blomquist’s latest project is called Tegucigalpan. His 2016 album “The Fifth of She” is particularly noisy and dense.

“I write and record songs on my own by multi-tracking — laying down one track, listening and playing along with another instrument to lay down the next, until the song is complete,” Blomquist said.

Both Blomquist and Higgins had a hard time describing their music. They rattle off lists of subgenres to try to give context, but in the end, Higgins said, “I don’t know if it’s as much as I actively play a certain type of music as it is (that) I write music and it turns out to be this type of music. I’m thinking about my influences and my aesthetic choices that I’m making when I write music, but I don’t think that dominates my process.”

A home for contradictions

The freedom to write without a formula is appealing, and that’s why Nightlight has become such a home for musicians who don’t fit the traditional categories. It’s a place where you can be weird. Unlike going to a folk concert where the majority of the audience is dressed in flannel and worn boots, an audience at Nightlight hosts people who dress in all black and have dirty hair. It has people who wear tight leather corsets and short skirts and people guys who are just in jeans and graphic tees. The differences are what bring the community together.

“There are so many contradictions,” Martin said. “There’s so much stuff in that scene that is comforting or soothing, and then there’s stuff that’s pleasing in this sort of deeper, mellow level. There’s stuff that might poke your brain and make you excited or make you head bang.”

Granted, the music might not be to everyone’s taste, but the people you find in this scene are genuine. They love music. They respect one another’s creative endeavors. And they seem to have found their niche.